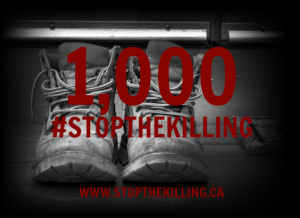 TORONTO, May 26, 2015  – A young worker’s death at a non-unionized mine in Northern Ontario is another reason that Canada’s Westray Law must be more strictly enforced nationwide, the United Steelworkers (USW) says.

“Workers continue to be killed at an alarming rate across Canada,” USW National Director Ken Neumann said, following the May 23 death of Alexie Dallaire-Vincent, 22, at a gold mine operated by St. Andrew Goldfields Ltd. about 125 kilometres east of Timmins.

“In this case, as in literally thousands of other workplace fatalities over the last decade, tears are definitely not enough,” Neumann said.

“Attorneys General must step up to the plate and demand full enforcement of the law we fought for to hold corporations, their directors and executives accountable for workplace death and injury.”

Amendments to the Criminal Code, known as the Westray Law, were enacted in 2004 to allow for criminal prosecution in cases where corporate negligence leads to workplace deaths and injuries.

“We have enough inquiries and mining reviews to last a millennium; the recommendations they produced must be taken seriously and implemented, and much emphasis should be placed on training,” said Marty Warren, USW Director for Ontario and Atlantic Canada.

“The bottom line is that we have a law that is not being enforced. We want mandatory, proper investigation, charges laid and convictions, whether a workplace is unionized or not. The law does not discriminate. But those who are supposed to enforce it do,” Warren said.

USW Western Canada Director Stephen Hunt said the recent deaths of workers in B.C. sawmills have resulted in recommendations that the RCMP be directed to do proper investigations in those instances.

“Our message is slowly getting through,” said Hunt. “We are trying to show that these are not isolated instances and they are not ‘accidents.’ Criminal accountability must be recognized in our society at every level, or more workers will die. It’s that simple.”

Municipalities across Canada have endorsed the USW campaign, Stop the Killing, Enforce the Law, which demands greater enforcement of the Westray Law.

The campaign will be raised in Edmonton on June 6 during the 2015 Federation of Canadian Municipalities annual conference.